Our 2019-2020 year was another robust one for the Humanities & Ethics Center, filled with programming that brought together members of the Drury community for continued learning, contemplation, and conversation.

We launched a new series this past fall, “Works in Progress,” or “W.I.P. with the H.E.C.” The series 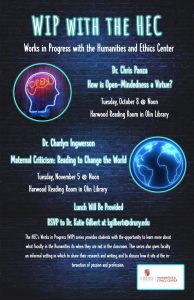 provides students with the opportunity to learn more about what faculty in the Humanities do when they are not in the classroom. This series also gives Humanities faculty an informal setting in which to share their research and writing, and to discuss how it sits at the intersection of passion and profession. In October, Dr. Chris Panza shared his work in progress,  “How is Open-Mindedness a Virtue?” Chris noted that “a look at the recent scholarship on the virtue of open-mindedness not only reveals little agreement on how to define this commonly referenced character trait, but also leaves us with a few unsolved dilemmas. After providing an overview of the current literature, Chris suggested that a turn to an ancient eastern Chinese perspective might help; specifically, he argued that a 4th century BCE Confucian, Xunzi, can help us to provide a definition that settles the conflicts and resolves the dilemmas.

In November, Dr. Charlyn Ingwerson shared her talk, “Maternal Criticism: Reading to Change the World.” Charlyn argued that literature and critical activity in literature are vital to revolutionary shifts in cultural perspective. In her talk, Charlyn advocates for Maternal Criticism, activity in literature that recognizes the authority of those who mother, who resist violence, who respond to the demands of vulnerability and work toward building sustainable peaceful communities. In the second half of her talk, Charlyn demonstrated a Maternal Critical approach in a text by Palestinian writer Sahar Khalifeh. 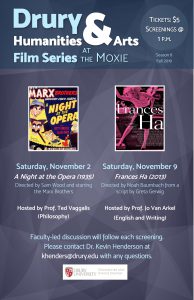 This past fall marked the launch of our eighth (!) season of our Drury Humanities & Arts Film Series at the Moxie. So many of the questions, concerns, and hopes that the Humanities collectively investigate are represented in the medium of film. Directing this series, Dr. Kevin Henderson works with the Moxie each semester to choose a blend of classic and contemporary films that highlight deep and enduring humanistic questions and themes. Each film is followed by a discussion with the audience; discussions are led by Drury faculty members who research and teach in an area related to the selected film. The screenings and conversations bring together students and members of the Springfield community to think and talk about ideas important to the experience of being human, on screen and off.  This fall, Dr. Ted Vaggalis hosted the Marx Brothers’ Night at the Opera (1935) and Professor Jo Van Arkel hosted Greta Gerwig’s Frances Ha (2013).

Each year the HEC provides programming related to a theme, in conjunction 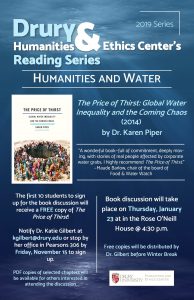 with the Missouri Humanities Council Symposium theme. Our theme for the 2019-2020 year was “Humanities & Water,” and the HEC paired several of our series with questions related to the role that water plays in the human experience. For the HEC’s Winter Break Read series, we selected The Price of Thirst: Global Water Inequality and the Coming Chaos, by Dr. Karen Piper. An academic work that is also a gripping read, The New York Journal of Books describes it as “an eye-opening book about a hotly contested vital resource. [Dr. Piper] balances her post-colonial theoretical foundation with ground truthing in the best traditions of participant-observation and investigative reporting. The outcome is a deeply moving exposé of how ordinary people’s lives can be altered irrevocably by corporate greed.” As is the HEC’s tradition, the first ten students to sign up to participate in the Winter Break Read received a free copy of The Price of Thirst. Students, faculty, and members of the Drury community gathered in the Rose O’Neill house for a book discussion in January. 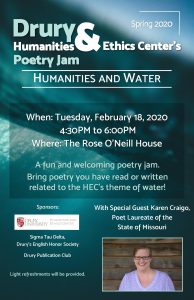 We followed our January book discussion with a February Poetry Jam: Humanities & Water, again dedicated to the theme of water and held at the Rose O’Neill House. We were especially fortunate to have Missouri’s Poet Laureate, Karen Craigo, join us for the event and share her own award-winning poetry. This event was spearheaded by our Fall 2019 Student Intern with the HEC and the Missouri Humanities Council, Cheyenne Heavener. Some forty students attended the event, and many read their own original work.

The HEC has developed and hosted the Missouri Humanities Council’s spring Symposium for the past two years. This year, our third, we were especially excited to host an expanded version of the Symposium, “Humanities & Water,” which was to kick off on the 50th anniversary of Earth Day. Under the guidance of Ashley Beard-Fosnow, Associate Director of the MHC, the Symposium expanded out across the city to bring in additional partners, such as the Springfield Greene County Public Library, and grew into a two-day event. Highlights were to include a free luncheon in the ballroom of FSC paired with a talk by Dr. Karen Price, the author of The Price of Thirst. Students would have the opportunity to attend and meet with Dr. Price in person.

While we were disappointed not to be able to hold the Symposium in person this year, the MHC worked quickly to 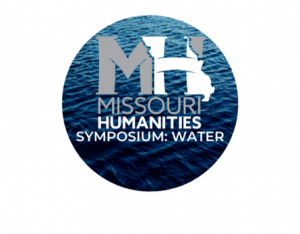 transfer the Symposium to an online event. Talks were recorded, and are available for viewing on the MHC’s Facebook page. While each talk was truly engaging and informative, some of you may be especially interested in the keynote delivered by Pulitzer Prize winner Pat Stith. Pat Stith has been an investigative reporter and storyteller for 35 years. Over that time, he has won dozens of journalism awards, including a Pulitzer Prize in Public Service in 1996 for his work investigating the environmental and health risks caused by water contamination from North Carolina’s hog industry. Stith, who is a wonderful storyteller, shares his experiences reporting on water and the environment, and discusses the role of the media in raising and defining local/statewide issues. This program is also part of the “Democracy and the Informed Citizen” Initiative, administered by the Federation of State Humanities Councils. The initiative seeks to deepen the public’s knowledge and appreciation of the vital connections between democracy, the humanities, journalism, and an informed citizenry.

We were disappointed to have to cancel our Spring portion of our Film Series at the Moxie, also dedicated to the theme of Humanities & Water and featuring The Secret in their Eyes (2015), to be hosted by Dr. Tim Robbins; Endless Summer (1966) to be hosted by Dr. Patrick Moser, and the documentary Maiden (2018) to be hosted by myself. However, we look forward to continuing to collaboratively work with The Moxie during the 2020-2021 academic year.

In closing, I’d like to acknowledge that we’re living in a moment in which the human experience is transforming so quickly that it is hard to process. The Humanities helps us to place both the crisis of COVID-19, as well as its attendant economic fallout, in context. Historians, for example, reminded us to draw on the lessons of the flu of 1918. Those well versed in languages and cultures other than are own are especially adept at understanding and explaining other nations’ approaches to managing the pandemic, as well as other ways of communicating public health information. Literary scholars are drawing on representations in literature from the Middle Ages and the bubonic plague (e.g. Chaucer’s The Canterbury Tales) to the recent strand of pandemic genres in climate change fiction to help us think about how to navigate what is and what could be, as well as to imagine alternatives. Debates about Religious group services in the face of a pandemic prod us to consider the role of religious faith in the midst of a crisis, as well as the nexus between religion and science. At the heart of both national discussion and administrative duties are not only critical thinking, but ethics, and the schools of ethical decision making that one can learn through a course in Philosophy. And, as we hunker down at home, so often it is in the Humanities that we find solace: a poem that brings us to another space and time, a novel that grips up, a conversation about the most recent films on Netflix. I wish you all the best until we can collectively gather, and think together again about the human experience, and the texts and documents that record it, in all of its varieties and complexities.

Director of the Humanities & Ethics Center